Lawn not looking the way it did in fall? Read on to find out what could be going on. 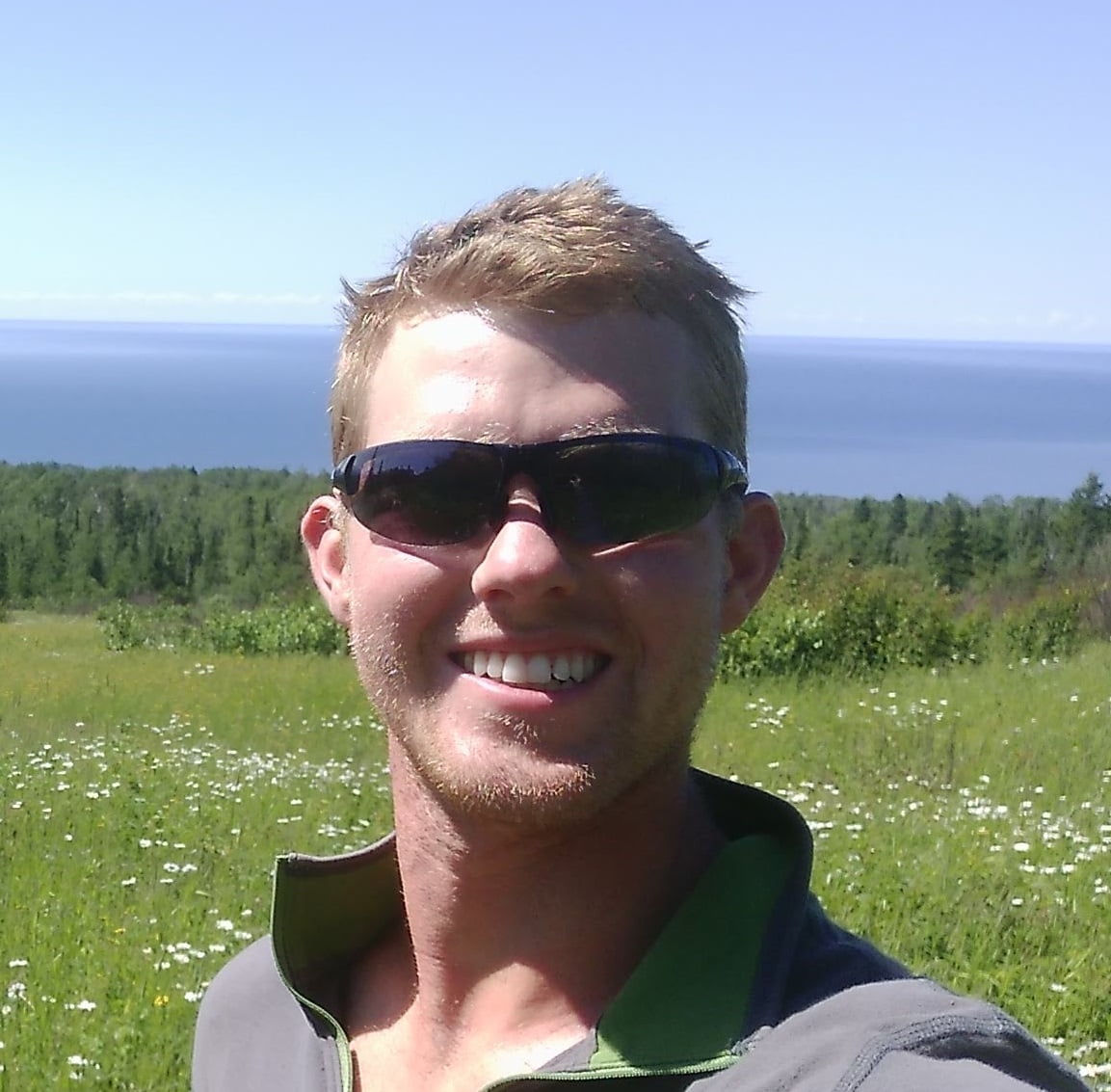 The weather is warming, snow is melting, and your lawn is starting to show its face. Unfortunately for many, that beautiful lush turf that you remember from fall isn’t looking so pretty anymore. Onces the snow melts, Voles, Dog Damage, and Snow Mold all become very apparent throughout that once beautiful lawn. It’s no coincidence that as soon as this happens, our phones begin to pick up from current customers wondering what the heck is going on. Fear not, most of these issues are purely cosmetic and will not require anything to rebound back. 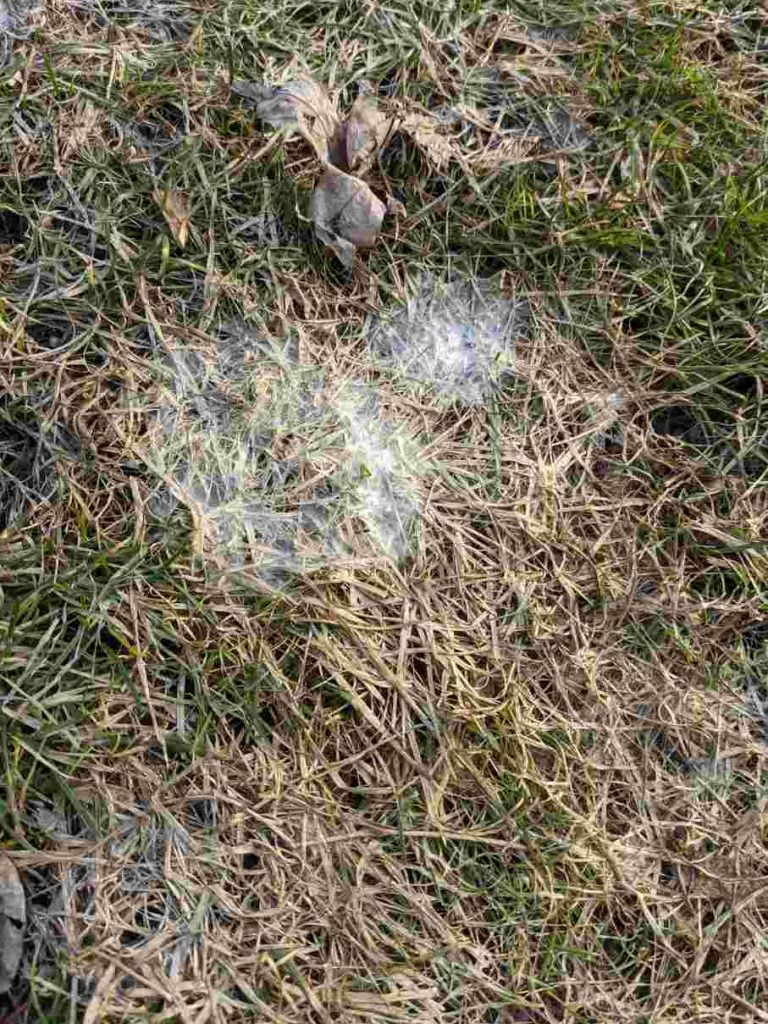 Snow Mold is a cool season fungus that thrives in cool weather, as soon as the snow melts, and mainly affects cool season grasses (like our MN grass). There are two main types that affect us, Gray Snow Mold and Pink Snow Mold. Both of these have very similar characteristics. You’ll see gray or pink patches throughout the lawn that, upclose, look kind of like spider webs.

When things dry out completely, Gray Snow mold will generally be gone as quickly as they appeared, with no damage actually caused to the lawn. Pink Snow mold on the other hand, will also leave quickly but can cause damage to the turf as it actually affects the crown of the grass plant.

What can be done?

Cultural Practices
Fall time cultural practices can help; leaves, debris, and tall grass all are breeding grounds for disease so it is important to make sure the lawn is ready for winter.
1- For your final mowing, mow the lawn shorter than you normally would, say 2.5” tall.
2- Make sure to cleanup all leaf debris from the lawn before the snow hits. Matted down leaves are a huge area of concern when it comes to Snow Mold. I generally recommend mulching leaves until you cannot see them. Sometimes bagging is necessary though especially if you have a heavy leafed tree such as a Bur Oak .

Fungicides
There are really no fungicides that take care of it once it has happened, however, there are fall time fungicides that can help. With that said, I wouldn’t recommend using these as it is generally a cosmetic issue.

Raking
The biggest thing is to help your lawn dry out. By lightly raking these areas, it will increase the airflow and therefore allowing it to dry out quicker. Be careful, this should be a light raking otherwise you will tear up the lawn!

Dethatching
If you have a very heavy thatch layer (the area between the grass shoots and roots), this can cause many different diseases, not just snow mold. If your thatch layer is more than ¾”, I would recommend Dethatching the lawn. Please note, VERY few lawns actually need this done.

They're called VOLES not MOLES! 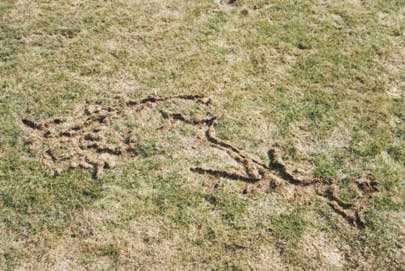 Vole damage is often the most alarming issue come spring time. It is also mistaken for moles all the time. Voles are small rodents, very similar to a mouse, that feed on grass blades and tubers throughout the winter time. It is important to note, as far as the lawn goes, that voles rarely cause lasting damage. While they may eat the roots/tubers of flowers and landscape plants, they generally stick to just the grass shoots. This is important to know! Their damage looks like small runs throughout the lawn that are brown and dead looking. There will also be dead grass in piles and over the runs.
Due to them only chewing on the grass shoots, your lawn will most likely come back just fine as soon as it starts growing again!

Moles vs Voles
A common mistake is to think this damage is caused by moles. One big difference between the two is that moles don’t actually eat the turf, they tunnel underneath and create voids. This is very apparent as you walk over them and they collapse. Their activity is also not really seen in the springtime. You’ll usually see Mole damage throughout the growing season. Voles on the other hand do most of their damage over winter, so you’ll see the damage in the spring.

What can be done?

Cultural Practices
Again, cultural practices can help a lot. Mowing the lawn shorter, about 2- 2.5”, right before the first snowfall will decrease the appeal of your lawn to voles. They’ll have less grass to eat and less to nest with, making your property a bad choice for them to stay in.

Insecticides
Please. Please. Please! Do not apply insecticides to take care of Voles. Voles generally do not cause lasting damage, and grass is their main source of food. So why would someone recommend an insecticide? Most often it is because they are confusing Voles with Moles. When someone has a Mole problem, they will often be recommended to apply an insecticide because moles often feed on insects such as grubs. That is still a bad recommendation. UNLESS you have actually found grubs, DO NOT APPLY any Insecticide! Grubs are a TINY part of a Moles diets, and an Insecticide will do nothing for many of the other things they eat such as earthworms.

Repair?
Yes it looks bad, really bad, when the snow melts and you have Voles damage, but it’s short lived. You can definitely rake up the dead grass, but that’s about all I would do. If it makes you feel better you can apply some new dirt and seed, but by the time it germinates and grows, your existing lawn will be starting to fill back in! 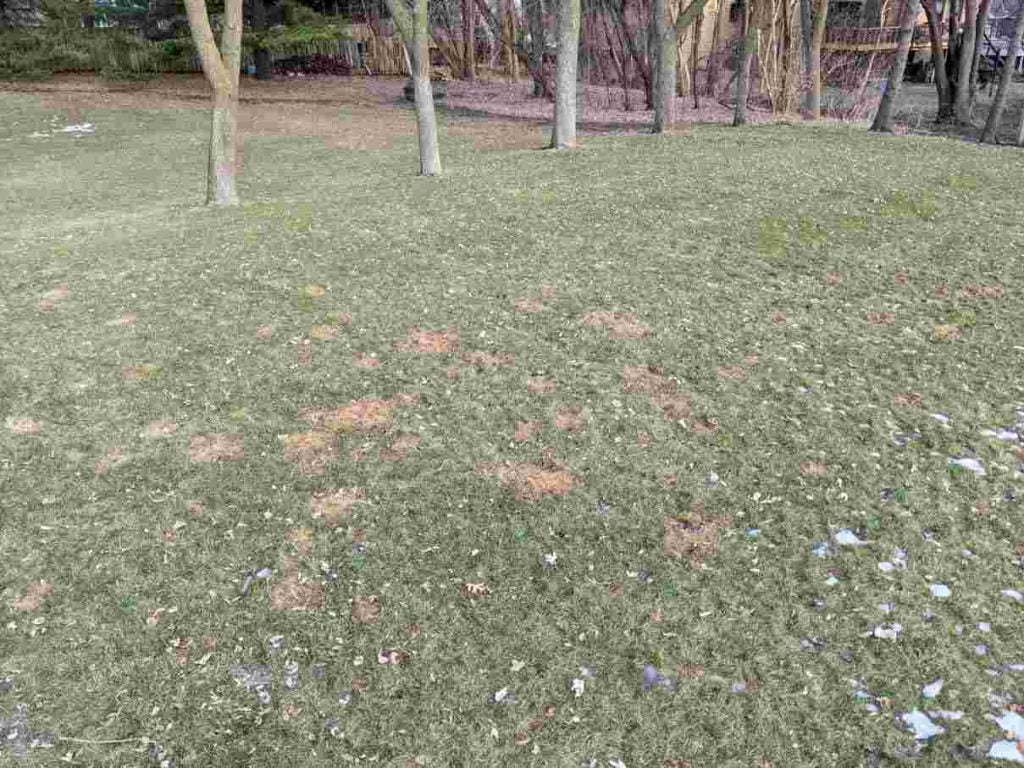 If you are a dog owner, this one is probably pretty obvious. Along with the springtime chore of picking up after Fido, tons of large yellow areas lie just beneath the snow, waiting. This is due to your best bud urinating over winter. All that builds up in the snow until things start melting which intern give the lawn a super dose of it. Urine burns are actually very simular to fertilzer burns in how they damage lawns; most of the time the turn may not recover.\

What can you do?
This really depends on how healthy your lawn is and what type of grass you have. I have a 100lb Malamute, and on top of the giant presents he leaves, there is a ton of urine damage during spring. Luckily, I have a pretty dang healthy lawn with a good amount of Kentucky Bluegrass. This Bluegrass will fill in over time, so after about a month, the lawn looks good as new.
Some people are not as lucky, it may or may not fill in completely. It may be a good choice to do some reseeding in these instances. This is best done by first lightly raking the existing dead grass out, then topdressing with some good seeding soil and applying some seed. Make sure to rake it in and use seed that is of very high quality (expensive) and matches what type of grass you currently have. Water, water, water. It will germinate quickly and start filling in.

This one takes and experienced eye, or a vigilant homeowner, to diagnose. Last year (2020) wasn’t too bad of a year for grubs in comparison to years past. However, they are always out there chewing on lawns across the Minneapolis area. Grub damage generally start late summer, when you’ll notice some dead areas in your turf. By the beginning of fall, your lawn should generally perk up and everything should be nice and green. Those dead spots stay dead and even get worst through fall.
No problem right? It’ll all look good after winter? Wrong. If its grubs, you will basically be left with a huge bare spot that will actually get worst the next spring.
This is where a well trained eye can help diagnose. You cannot check for grubs until the lawns come out of dormancy and they (grubs) come back up to the surface to feed on the turf roots. Once the lawn starts growing well, you can peel back where the dead meets the growing, and check. If you have our service, we do check for these when we see bare areas arise. HOWEVER, we are only on the property for a few visits during grub activity, so it’s important for homeowners to stay vigilant when they see bare areas getting worst, especially late summer.

What can you do?
If grubs are found, there are two things that should be done: Insecticide and Reseeding.

Insecticide
You should absolutely 100% get a spring grub control if you find these and their damage in your lawn. I’m not a huge Fungicide and Insecticide guy, but grubs can take your lawn to heck and back. Spring grub controls, when using a season long control such as what we use, has by far the highest success rate. It WILL NOT kill what is there, but it will not allow the next batch of June Bug or Jap. Beetle larvae to turn into grubs in July/August. Trying to kill an overwintered grub is a waste of money and chemical. I repeat. Don’t waste your money trying to kill whats there in the Spring. You should instead make sure to get a product that will last all season long. These are the most expensive grub controls usually, but hands down work the best.

Reseeding
When grubs damage is found once the snow melts, I recommend people reseed to fill back in those bare areas. Usually those areas are pretty good size, and would take a very long time to fill in on their own. First rake the bare areas to loosen up the soil, then add a small amount of seeding soil (about 1/2″). Finally spread some very high quality seed into that new soil and use the rake to lightly bury it.
But won’t those grubs just eat the new seed? Nope. By the time that new seed has a deep enough root system, those grubs will have already turned into Jap. Beetles or Junes bugs, so shouldn’t really be any worry there.

Too learn a little more about grubs, check out This Blog dedicated to them, as well as our page dedicated to Grub Control HERE.